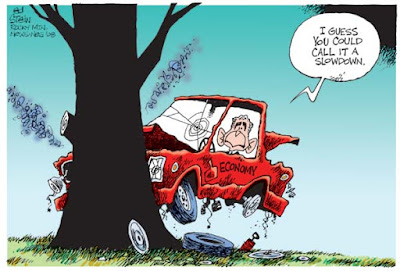 "President Obama made a surprise visit to Iraq this week where he declared it is time for Iraqis to take responsibility for their country. Said Iraqis, 'You guys first.'" --Seth Meyers

"The number one threat: President Obama. Now folks, we all know how he greeted Saudi King Abdullah. [on screen: reports of Obama bowing, 'something no other President has done]. Exactly! The president cannot debase himself and our country by bowing in front of the Saudi King. You hold his hand, kiss his cheek, and reorient our entire foreign policy of the last 20 years around securing his oil deposits [on screen: photos of George W. Bush with Abdullah]. As for you, King Abdullah: looking good, keep that gas under two bucks a gallon and you can turn the Lincoln Memorial into a camel stall." --Stephen Colbert