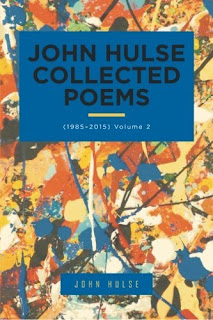 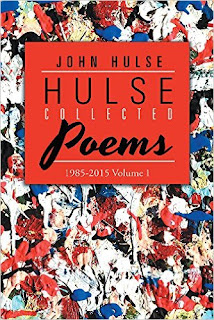 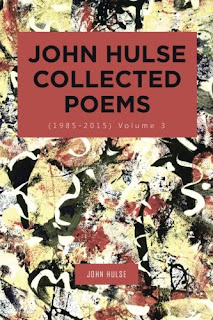 Proceeds and Awareness being raised for the Paralyzed Veterans of America. Thank you!

Winner of the International Poet of Merit Award and the Shakespeare Trophy of Excellence.

An emotional rollercoaster. Soon to be a cult classic.  Kristina Betts, Lapel Review

His poetry will go on being read and studied for years to come. From his pillowcases with magical powers, the consequences of a man coming home five minutes too late, or a Marine platoon in Vietnam making a left turn instead of turning right. The poems build upon one another with lines of creation, then of destruction. Then start all over again with the next poem and the next line. It will wear you down. An overwhelming presence here. And while you are reading, starvation seems inevitable. Survival unsure.

I fully agree with Bukowski Lover's concise review. John Hulse does, indeed evoke the wordplay of the Late CB, but he brings an honesty and openness way to beautiful and fragile, so that you'll weep every time that pure sweetness meets the mean streets of this Reality we all share. He'll make you yearn for its Deliverance, and then, suddenly, you'll know what you must do to save it. ... and you're not alone... even if you feel like it. Hulse evokes here a sort of Matthew 5: 1-12 Beatitudes for our times, through deep-diving, immersive views into the world of Empathy and Mercy, and Compassion that are spell-binding in their simplicity.

This book should be included in the "Welcome to Humanity" Packets for all newcomers. John Hulse is a true Master of the Word, and most tender of Champions for the Human Condition.

Mr. Hulse displays a mastery of the foibles of humanity—specifically men. He’s got a sharp wit, a fresh an interesting take on relationships, and isn’t afraid to push the envelope with his content. His bio discusses his world travels and myriad life experiences, and this reader can’t help but notice how his past very obviously affects his work. It appears to be an organic evolution, because growth in technique, word selection, and image creation is evident throughout. A thoroughly entertaining jaunt through the mind of a man who is without doubt as interesting as his work.

Whenever I’ve had the opportunity to read Mr. Hulse’s work, I am always struck by the mix of brutal honesty and humorous social commentary. He hasn’t failed to impress with this latest release. His jabs at the evil of corporate America, his insights into the dichotomous nature of public America, and his humble and hilarious comments on his personal life never disappoint. His raison d’être is poetry, and this dedication is obvious. With the loss of so many great poets in the last 10 or 15 years, I am glad another voice is there to contribute to the art.

we only really ask two things of congress

then maybe they’ll
let them
poison us
a little

or maybe a lot

again, depending
on the

on the back of a dollar

got a cheeseburger.
paid.
got the change,

and on the back
of one of the dollars
returned to me
was written,

“whoever finds this dollar
will be the first one
to witness

but it could have said

the handwriting
was terrible.


the best and the worst job I ever had


It was the first week of the


and we were headed
to the Jewish Community Center
in Berkeley.

with a load of explosives
strapped to their chests
or inside their cars.

My job was to make sure
they didn’t get through
the front gate.

The hours passed
as the rabbi’s continued
their lessons
in peace.

(Blessed are you, Lord, our God, king of the universe,
who performed miracles for our ancestors in those days
at this time.)

I wondered what my mother
and father back in Indiana
would think of their son now,

staring straight ahead
wondering what
the next moment
would bring.

For two weeks
I patrolled outside
the synagogue
without incident.

The same time in Israel,
suicide bombers
killed 22 and wounded 17.

I prayed for a return
to the peace
of the cornfields.

I was alive,
and it was time
to go home.

Horace felt that you really couldn’t write a decent line of poetry
if you didn’t drink something stronger than water.

Keats talked a lot about the soul and thought it best when the poetry was unobtrusive, the subject was what really mattered.

President Kennedy said that poetry reminds man of the richness
and diversity of existence.

Emily Dickinson said when she wrote the great poem
it felt as if the top of her wonderful head had been
taken off.

Eliot spoke of the inexact formulas when emotions are recollected
in tranquility.

Maxwell Bodenheim compared writing poetry to trying to paint
the color of the wind.

Marianne Moore, such a clever girl, said that poetry was nothing
more than verbs and nouns.

Elizabeth Drew read poetry because poets were haunted
by the inescapable tyranny of time and death.

Flaubert believed that poetry was an exact a science as geometry.

Brodsky said that if a society failed to appreciate poetry it was doomed to oblivion, or at the very least destined to be ruled by
a tyrant or dictator.

Emerson had a beautiful thought. He believed that every word was
once a poem and every new relationship was a new word.

Christopher Morely believed that the courage of the poets is to
keep the door open that leads to madness.

Uncle Walt yearned for the good audiences. He found them.

Dylan Thomas believed that a good poem helps change the shape and significance of the universe.

With Dudan, poetry was a destiny.

Chesterton took his mind to wild places, all the while praying like mad that it would return safely.

Robert Graves was kind enough to thank those around him for his
inspiration.

E.B. White believed in mystification. Where was the pleasure
in giving all meaning away.

Randall Jarrell spoke of the poetry of thunderstorms and was struck by lightning a half a dozen times.

Robert Penn Warren called it the deepest part of autobiography,
a hazardous attempt at self-understanding indeed.

Samuel Taylor Coleridge described poetry as the best words
in the best order.

Poets to Santayana were the priests of the muse.

Yeats made poetry in the conflicts within himself.

Mr. Sandburg thought about what was going on behind a half-closed door and how we were all really sea animals living on land, wishing with all our hearts that we could fly.

Bukowski believed in the muse and that poetry was the only thing
between you and impossibility.

Robert Frost, with conviction, had it down.

Poetry is a way of taking
life by the throat.

standing on rooftops 4 floors
above the concrete,
on my toes leaning off,
almost went that time.

the cars and people
move along below,
no one notices
my high wire act.

a strong wind and that would
have been it.

tried to invent new games
to avoid thinking of the end.

try not thinking about it
for one minute,
five minutes,

An hour was impossible
on so many nights.

body wasting away,
from the inside out
it seemed,

did I do things back then,
because of the pain,
and the hunger,

I did so many things
that I am not proud of,

and for the billionth time
from the bottom
of my heart,

I am truly
and deeply

At a place called
Logistical Base Seitz,
somewhere
west of Baghdad,

near Baghdad,
insurgents detonated
a roadside bomb
wounding
4 US soldiers.

outside of Kirkuk,
insurgents blew up
a roadside bomb,
wounding 11,
including 3 children.

in Balad,
insurgents began
a mortar attack
at 5:04pm,

resulting in the deaths
of 4 US soldiers,
3 others were wounded
in the attack.

in Ramadi,
insurgents attacked
a US convoy.

Part of the convoy
included a giant oil tanker.

An RPG set the whole thing
sailing skyward
in a giant ball
of flames.

Casualties unknown
at this time.

A lot of mothers, fathers,
sisters and brothers
are crying right
now.

Can you hear them?

the poems that I have to write for joni

the responsibility
of this task
is almost
more

than I
can bare.

to the lost volume of poetry, part 1

lack of pen,
lack of paper,
lack of energy,
too much energy,
psychotic technology,
broken pipes,
rain, flood, fire..
and the beautiful woman
waking up in bed

wagging her finger at me.