They were both free up until the Vietnam War (offering hope, change, and 0 percent financing) 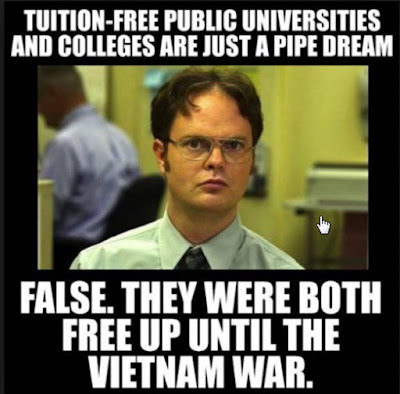 "As you know by now, the government is now taking an active role in the auto business. President Obama offering hope, change, and 0 percent financing." --Jay Leno

"You know what's interesting? Today, a reporter in Crawford, Texas, asked former President George Bush how he felt about General Motors and Bush said, 'You know, since I left office, I don't really follow the Iraq war anymore.'" --Jay Leno

"Actually, President Obama says that G.M. filing for bankruptcy may be the best alternative. He said that bankruptcy is a good legal tool for a company not to have to pay creditors back, which sounds great until you realize, hey wait a minute, we're the creditors! Great, so you want to help them not pay us back. I mean, even A.I.G. is going, 'Why didn't we think of this?'" --Jay Leno