Well, if you don't count AIG, of course (Spreading democracy in the Middle East) 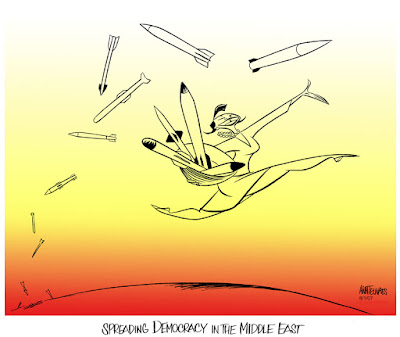 "Anyway, U.S. Attorney General Eric Holder tried to put all this in perspective. He said this is the first act of piracy against the United States literally 'in hundreds of years.' Well, if you don't count AIG, of course." --Jay Leno

"Speaking of that, the New York Post says that Bernard Madoff's wife, Ruth Madoff, may go back to using her maiden name. But I don't know if that's going to work because her maiden name is bin Laden." --Jay Leno

"And speaking of naval heroes, we have one on the show here tonight. Senator John McCain. Let me tell you something, McCain knows a thing or two about battling pirates, because, as a young man, he led the crew that sank the famous pirate Blackbeard's ship." --Jay Leno