See, I told you they've been monitoring us (I'm sorry I enriched uranium) 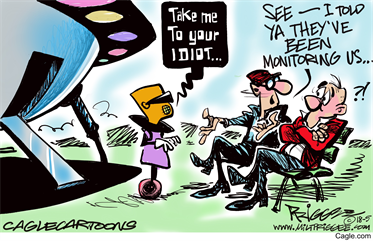 "Iranian President Mahmoud Ahmadinejad is trying to win over the American people. It's sort of a PR campaign. Earlier today, over at the U.N., he was signing baseballs that said, 'I'm sorry I enriched uranium'." --David Letterman
"President Bush has issued a new warning to Iran that it faces new economic sanctions, after reports by the UN Atomic Watchdog Committee that Iran is still enriching uranium. President Bush promising new economic sanctions. And believe me, if there's one thing the president is an expert on, it is ruining a country's economy." --Jay Leno
"According to a new survey, Hillary Clinton's popularity rating is down to its lowest point in over a year. When Bill Clinton heard this, he said, 'If there's one thing Hillary can do, it's bring polls down.'" --Conan O'Brien