Remember the stories he used to tell us about weapons of mass destruction in Iraq? 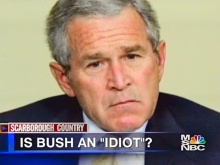 "A gay activist dumped glitter all over Newt Gingrich. He wants Newt to stop being against gay marriage. But Newt believes marriage is a sacred bond between a man and his wife and his mistress and the other woman he's seeing on the side." –Jay Leno
"Dick "Kaboom" Cheney is publishing his memoirs. Cheney is a wonderful fiction writer. Remember the stories he used to tell us about weapons of mass destruction in Iraq?" –David Letterman
"Officials at the Secret Service had to delete a tweet from their official Twitter account because they made fun of Fox News. Knock it off, Secret Service! That's my job." -Craig Ferguson